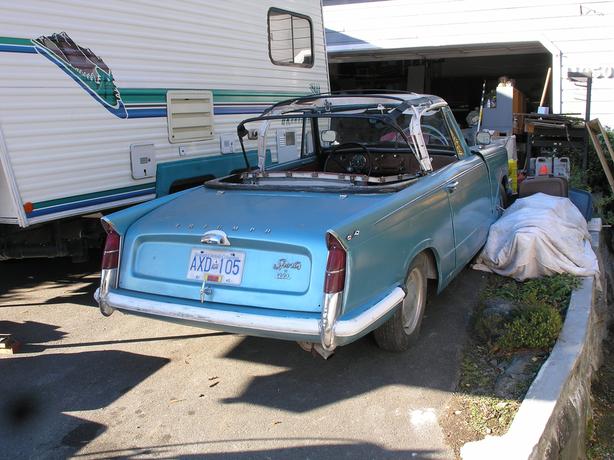 Car-1 : Victoria Car - 1986 Complete engine overhaul by Cords.
Vehicle then sat on blocks in a garage for 20 years until the owner died! I bought it 'ex estate' and used it as a 'fun summer driver' for some years. In 2016 I started a major restoration (and conversion to a hard-top Coupe) but have 'run out of steam' and 'capability' due to a serious neck injury in 2017.
The car is still 'very restorable'.

Car-2 : bought initially as a 'parts car' for the first, but it is actually the better 'long term' restoration project. Significant body panel restoration has already been already done. 1200 cc, twin-SU engine.

Between the two cars (and other 'donors' along the way) there a BOXES OF EXTRA PARTS, many brand new, ordered from the UK!! (Instruments, switches, hubcaps, wiring, lights, diffs, gearboxes, rims, starter, gen, chrome trim, .....)

THESE CARS ARE EXACTLY THE SAME AS THE EQUIVALENT YEAR TRIUMPH SPITFIRES EXCEPT FOR THE SEDAN BODY.

PLEASE NOTE :
1) The price is a STEAL!!!!! Each of the cars is well worth what I'm asking for both, even without the extra parts. I just need them gone so I can get my place cleaned up and concentrate on finishing my '53 MG TD restoration!!
2) NO, I'M NOT SELLING INDIVIDUAL PARTS.
3) NO PHONE CALLS ASKING FOR MORE DETAILS. THE PHONE-# IS FOR YOU TO ARRANGE TO COME AND TAKE A LOOK!
4) Photos are of Car-1 only. I will try to post Car-2 pics later.