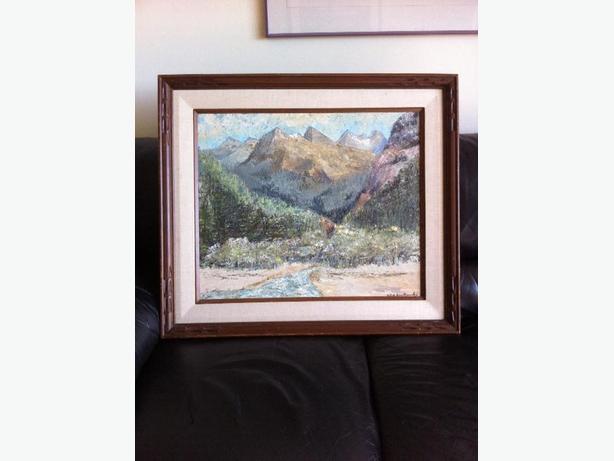 The painting depicts Fry Creek and environs in the summer of 1969 when the snowpack was low as was the water level in Kootenay Lake. I have also included a photo taken at a time when the water level was higher.

HEF Makovski was a Lieutenant Commander in the Canadian Navy aboard the HMCS Uganda (Ontario) during the Second World War. He was born in Vancouver BC and lived in Victoria. His brother-in-law was John Hamilton Stubbs the Commander of the HMCS Athabaskan who perished with its sinking in the north Atlantic in 1944. John Stubbs school and Mt Stubbs are named for this war hero.

After leaving the Navy, HEF Makovski taught at St Michael's University School in Victoria (1974-5). He was an avid painter and his artwork is evidence of his keen aesthetic sense. This is one of many yet to be discovered paintings by this masterful artist.

The work is tastefully framed in natural wood.