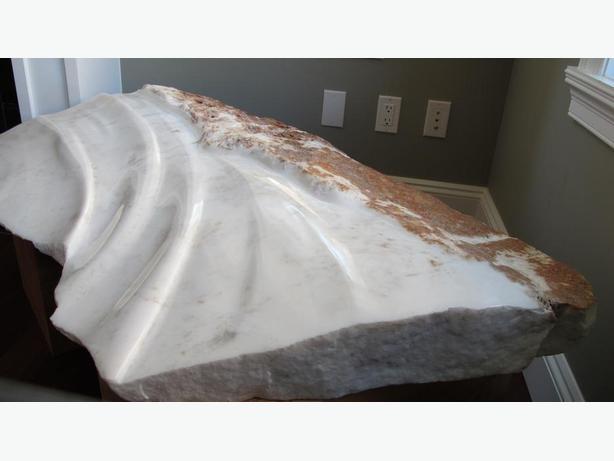 This is a wonderful sculpture that has to be seen to be appreciated, it would go perfectly in a front entrance, or an office. It was crafted from Pink Portuguese marble also known as Rosa Aurora I am selling this magnificent piece at 1/3 the gallery price. It measures 43 x 26 x 7 inches and weighs approx 500 lbs. It stands on two gorgeous 12x12 rough cedar blocks.

Here is some information from the Artist regarding this piece

This piece is from an ongoing series began in 1993 when I first started carving in Pietrasanta. These ocean or water sculptures are poetic metaphors that recall the origins of the material. Thousands of years before plates shifted and mountains were formed the remains of marine life built up upon the ocean floor. This evolutionary soup became the ingredients for the marble that would form over the millennia that followed. To carve water on the surface of stone is a natural regression to the inherent truth of material. It is an awareness of composition and time, a similar notion of time that captures the movement, ebb and flow of water, in stone, creating a lyrical stillness and irony. The union of water and stone is a microcosm of the gravitational relationship of stone carving on a planetary scale. The shaping of shorelines is a timeless process that silently grounds our perception in the world in which we briefly walk upon.