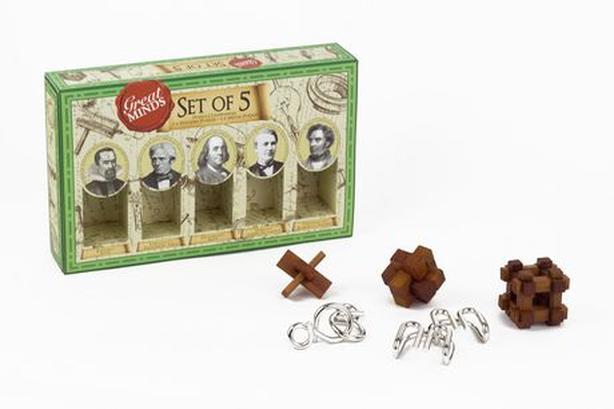 Kepler's Star:
Can you rebuild Kepler's star? A key figure in astronomy, Johannes Kepler's observations of a supernova in the Milky Way led to it being named "Kepler's Star".

Franklin's Kit:
Can you rebuild Franklin's kite? Benjamin Franklin was a major figure in the scientific world for his theories regarding electricity. His most famous experiment involved flying a kite in a storm to prove that lightning is electricity.

Edison's Light Filament:
Can you separate the light filament...and then put it back together again? Thomas Edison developed many inventions that greatly influenced life around the world, including the phonograph, the motion picture camera and a long-lasting electric light bulb.

Stephenson's Railway Sleepers:
Can you rebuild the railway sleepers? Robert Stephenson helped invent the first railway locomotive, The Rocket. He went on to became instrumental in the expansion of Britain's early rail network.