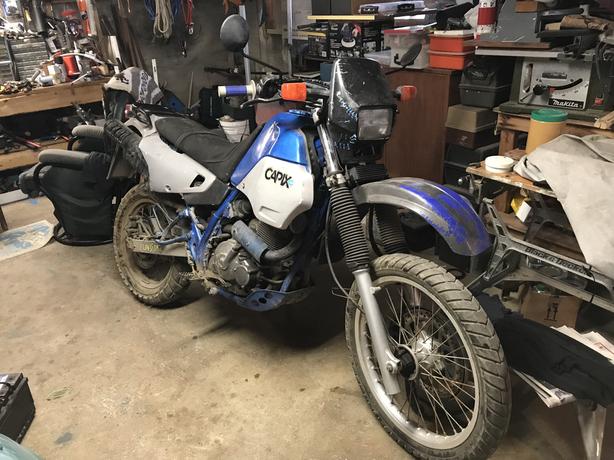 I bought the bike three years ago and drove it for a season and a half before I crashed it. then got another half season out of it. The bike is always been a good runner up until recently. I got it going for the season after the crash. I finished fixing a few things gave it a few test rides and it stopped working. after looking through the bike a few times I found out that it had no spark and the plugs are already pretty new so my guess is that it needs a new ignition coil.

unfortunately the bike is so old that they don't make parts for it anymore and a new ignition coil is almost impossible to find.

The only reason I'm really posting the add is I know how hard finding parts for these bikes can be. I would hate to scrap the bike when it has parts that someone else can use on it.

It has a new chain&sprocket, all the brakes work and new spark plugs. zero rust on the frame I had it stripped down and repainted. no starter solenoid but you can buy any generic one from an auto parts store and I can try and turn it over for you without it. the bike Has new bearings in the front and rear tires, new handlebars, mirrors grips and suspension is grate. I stripped the bike down to nothing and rebuilt it after the crash. the only thing that hasn't been cleaned up since is the gas tank has a big dent in it and the fairings are in So-so shape.

I'm Looking to get any reasonable amount of money out of it make me an offer by shooting me a text. it goes to the scrap yard at the end of September other wise

the last 3 photos were after paint during the rebuild an I have the hole thing documented.