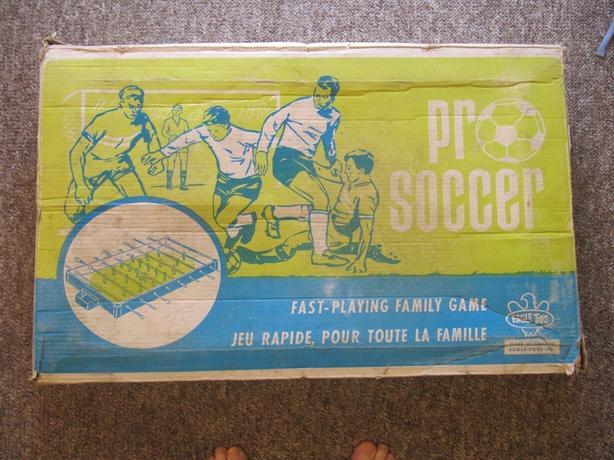 It's made by Eagle Toys of Canada, the same company famous for older table top hockey games.

This is obviously an early version of what is now known as Foosball or Fuzboll soccer games.

It has the original ball.

It's in great condition, needs a little cleaning on the surface because it's dusty/dirty in spots but it's not bad.

Great graphics on the sides.

The game is metal, the nets and players are a solid, hard plastic.

The nets have small grooves that fit in holes in the metal to fasten.

Each team has 4 rods of players. It is designed for a 5-3-2 formation although you could insert the rods in any order you want. One player on each team is missing his head.

There are 8 springs included, 2 each (one on each side of the players) for the goalies and the forwards (2 players per rod). Those rods are noticeably longer then the other ones (5 and 3 players per rod) and it's obviously those others don't need springs since the knobs on the ends of the rods (outside the game) are enough to stop the movement. There is an extra stopper attached on the goalie rods to stop them even sooner.

Basically with the smaller rods with more players on them easily slide enough to cover the entire width (so no springs needed).

The handle/knobs (red and blue pieces lying loose in the photos) go on the end of the rods outside the game. I have not attached them because they are a fairly tight fit and
I didn't want to have the possible struggle of getting them back off to get the game in the box. It may not be hard to put them on and take them off but I didn't want to potentially struggle with anything.

There are only 7 of the knobs included when there should be 16. What people do with table top hockey games missing the knobs is wrap several layers of tape around the end of the rod as thick as needed and it works great.

There is a "scoreboard" on each end--just a row of numbers 1-10 and there probably was some sort of small plastic slider for them but they are missing.

The box has damage and wear in various places including a hole on the bottom but is in pretty good condition considering it's age.