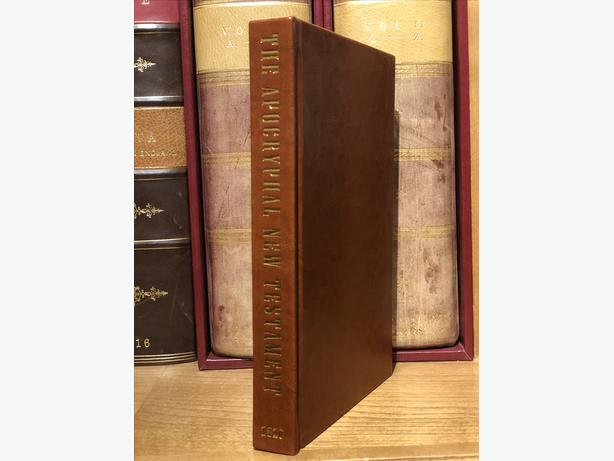 Very rare facsimile!
Did you know... in addition to the Old Testament Era Apocrypha Books, there are also New Testament Apocrypha Books? The New Testament Apocrypha is a set of non-canonical Gospels and Epistles written in the First Century AD. Though not part of the Bible, these books were revered and widely used by Christians throughout the first few centuries of the Christian Church. Did you know... It was not until the end of the Fifth Century AD that the currently accepted 27 New Testament Books were agreed upon to be canonical inspired scripture. But what about these other two dozen Books, all dating to the First Century AD, which were so widely accepted as scripture by Christians for centuries?
You may be surprised to find that these First Century Gospel accounts and Apostolic Epistles are actually NOT filled with ancient heresies of Gnosticism or Docetism or anything that contradicts scripture, as you may have heard. In fact, they were left out of the New Testament primarily just because their authorship or historical accounts could not be confirmed beyond a doubt. They may not be canonized scripture today, but they certainly were among the accepted scriptures of the Christian Church for centuries, so they are certainly worth reading today.
The New Testament Apocrypha dates back almost 2,000 years... but it was not until almost 200 years ago, in 1820, that these books were collected into one volume and published for the first time in English. The facsimile reproduction 1820 First English Edition of the Complete First Century New Testament Apocrypha is 9.25 inches tall, 6.25 inches wide, and over 1 inch thick. It is printed on heavyweight archival acid-free, cream-colored paper. It is only available in a stunning Deluxe binding of very high-grade top-grain chocolate brown leather, with exquisitely hand-marbled end papers... truly a gorgeous binding. Brand new, $100 firm.